Running in the Same Direction - Youthlink

Running in the Same Direction 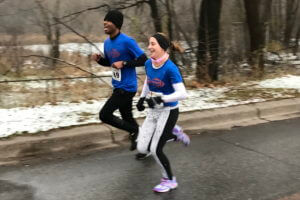 Mishka Vertin and Mike Jurasits, founders of Mile in My Shoes (MiMS), know first-hand about the joy of helping people become comfortable, confident runners. “Before we moved to the Twin Cities, we ran with a program in New York City that paired an experienced runner with a person staying in a shelter who had likely never run for sport or exercise. While we taught them to run, we learned about their lives and expanded our own worlds—a big ‘win-win’ for all. When we moved here, we missed our running community, so we started our own program.”

And that’s how MiMS came to be a Youth Opportunity Center partner in 2016. MiMS was founded to accomplish the same goals as the New York City group: pairing volunteer running mentors with homeless shelter residents. Mishka says that when the opportunity arose last year to expand the MiMS reach, they pursued a lead about YouthLink, and a new partnership was born.

From the start, everyone agreed that MiMS would be a good fit for YouthLink’s young people who are on their journeys toward stability and hope. MiMS had designed a “cycle” of runs, pairing a mentor and a young person experiencing homelessness. The morning runs, along a prescribed, but variable, course through Minneapolis included conversation and questions to ignite discussion. And, after a few adjustments, both the volunteer mentors and their young partners experienced improved stamina, confidence, companionship, and the value of another perspective.

Mishka laughs. “At first, we tried our usual early-morning running schedule with the young runners, but we quickly discovered that we’d have to adapt a bit.” Runs were scheduled for later in the day, to accommodate the patterns and schedules of the younger runners. 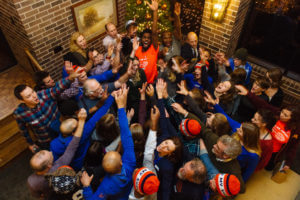 Says Mishka: “There’s power in running. It’s not just the exercise value—it’s the feeling of knowing your own body and taking charge of it. The encouragement of an experienced running mentor, one-on-one, side-by-side, is a great confidence builder. And we all need confidence to succeed—to step outside the familiar and try something new.”

MiMS mentors enjoyed the experience of partnering with YouthLink, and they plan to continue through 2017, building community and facing forward—just a little later in the day.

To get involved with MiMS, visit www.mileinmyshoes.mn