“My Gift is My Voice” – A Story of Determination, Support and Success - Youthlink

“My Gift is My Voice” – A Story of Determination, Support and Success 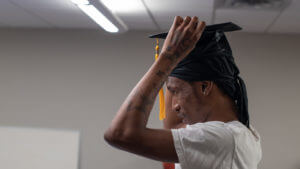 “With him it wasn’t a question of tutoring. He’s smarter than anyone I’ve ever met. We just had to find the right buttons.”

When YP first came to YouthLink, his education wasn’t the first thing on his mind, “I was couch hopping and my mom brought me down to get housing,” he remembers. “It took me about six months to really dive in and utilize the GED program. I was taking the GED course at Summit Academy at one point and had passed one of the tests with flying colors, but I got complacent. I didn’t get serious until I decided I wanted to get serious.”

YouthLink’s Transition Coach Jax reflects on his first introduction to YP’s off-the-charts intelligence: “Jason came to me and said, ‘He’s brilliant. We gotta make sure he graduates.’ YP was unique in that he had a picture of what he wanted his life to look like. He was ready to hit the ground running. He’s a determined young man.”

For YP, this recognition of his talents was enough for him to overcome his biggest obstacle. “I see myself as a self-saboteur. When Jason believed in me it made me want to follow through. I was able to stop being a roadblock to my own success.”

But there were some logistical roadblocks, as well. YP’s previous test scores had gotten lost in the system. Once Jason helped YP get that sorted, though, it was all a persistence play, “I would deliver problems to his apartment. Invite him to come to tutoring. Reminder after reminder. Making sure he understood how intelligent he is.”

“Whenever I’d see him I’d ask about the test. Thank him for showing up. Nag him for about three months all together until, one day, we met and he said, ‘I’m walking with South High School. I got my GED,’” Jax remembers.

“He was always thankful for the encouragement. Appreciative of the push,” says Jason. “Even when he wasn’t ready to make the move he would tell me: ‘I just want you to know I’m always appreciative of where you’re coming from.’”

YP remembers the time leading up to the tests in much the same way, “Jason would get on me. Scheduling time for tutoring. Asking me, ‘Don’t you want to graduate?’ I needed someone outside my family to see that I could do this. Jason wanted me to do it for myself. He saw that spark in me.”

He adds, “Once I did it, it was like a weight had been lifted. I felt bigger as a person. I realized I’m smarter than I think. I am capable.”

YP’s support system was just as excited to celebrate his success as he was. “There was a beautiful ceremony at Roosevelt High School. I wore an aqua robe and walked across the stage. My kids, my mom, one of my sisters, my friends all came out to support and celebrate me.”

In the months since the ceremony, he’s been making big moves and even bigger plans. Jax says, “He’s started a record label. Filled out the paperwork and incorporated without any help from us. He’s started doing voice-overs and wants to teach kids how to record music. He’s really a joy to work with.”

“My gift is my voice,” YP says. “I want to speak to kids, share my story and implement workshops to teach them how to use their voices in different ways. I want to eventually open homes for disadvantaged youth with a school that also teaches real-life, practical experience I never learned.”

As Jax looks at the future ahead for YP, he reflects on the role the GED will play, “Now that this obstacle is gone, everything else seems to feel more attainable. YP is the type of young adult who knew what he wanted to do. He just had to settle into it. When I look at him. I feel proud of his determination and all he’s accomplished.”

GED services are just one of the support factors offered at YouthLink that helped YP—and so many others—on their journeys into adulthood. But we couldn’t offer those services (or pay the salaries of our amazing staff) without your help. Ready to put your skills to work as a GED tutor—or a daycare provider while a young parent studies? Visit here to learn how: https://www.youthlinkmn.org/get-involved/